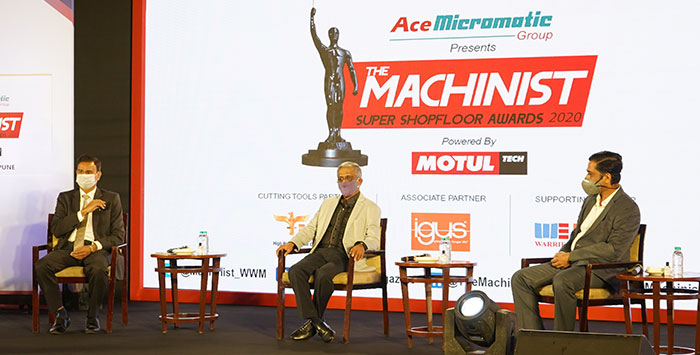 With #SafetyFirst and #SafetyAlways as its guiding principles, the sixth edition of The Machinist Super Shopfloor Awards was successfully and safely conducted on November 3 in Pune.

Yes, all the five editions of The Machinist Super Shopfloor Awards since the beginning in 2015 have been done in the month of May. But owing to the difficult circumstances that we are all aware of, it was just not possible to do it in the month of May or for the next five months after that in 2020. There were also talks about a virtual awards ceremony, but we knew that it would never come close to the charm or liveliness of an actual awards function. Having successfully concluded the Jury Meet physically in August, we had already set our eyes for a ground event. And as things started getting better and safer with Unlock 5.0, we decided to go ahead and organise a physical event.

The glorious day dawned on November 3rd in the great city of Pune; where else could we do it other than the manufacturing hub of India. That’s where the best of Indian discrete manufacturing landed to get recognised, honoured as well as felicitated and take home the coveted Machie Trophy. Of course, it was only possible because of the industry’s faith in this platform, which it has shown both by sending nominations as well as by joining us at the awards venue. Equal amount of gratitude goes to all our partners for their support to this coveted and robust industry platform. Not once did they blink their eyes and motivated us for the physical event. We are grateful to our Presenting Partner – the Ace Micromatic Group, our Powered by Partner – MotulTech India, our Cutting Tools Partner – Forbes & Company Ltd. with Brand Totem, our Associate Partner – igus India and our Supporting Partner – WeFire. Thank you all. It would not have been possible without their support.

Full credit to all attendees, who adhered to all the required protocols related to safety, hygiene and social distancing. In fact, to maintain the protocol of social distancing, we divided the awards ceremony in two parts. The winners of the large enterprises were felicitated in the first half and the winners of the SME Segment were felicitated in the second half. The objective was to limit the number of people inside the hall as per Government regulations and thus ensure a safe environment for all.

The event started off with the auspicious traditional lamp lighting wherein we sought the blessings of the almighty. It was followed by the emotional opening remarks of Niranjan Mudholkar, Editor of The Machinist magazine and by the inspiring welcome address by T K Ramesh, Managing Director & CEO, Micromatic Machine Tools Pvt. Ltd.

Post the CEO panel Discussion, the awards ceremony for the Large Enterprises conducted with complete professionalism as well as discipline. The Machie Trophy for the Super Shopfloor of the Year 2020 in the Large Enterprises was won by Tata Motors Limited, Jamshedpur! The first half function was rounded off with a cool vote of thanks by Yatendra Kumar, Business Head, MotulTech India. It was followed by a safe and healthy lunch. The first half also set standards and the ball rolling for the Part 2 of the awards ceremony that happened in the second half with the felicitation of the winners of the SME segment as well as the People Award winners. The ultimate vote of thanks of the day was delivered by Rishi Sutrave, Brand Publisher, The Machinist magazine. All in all, it was a day that will be etched in the memories of all with golden letters!